This blog post is about how to build high scalable and distributed messaging-based applications using ErlBus, which is a lightweight and simple library to enable what we want here.

Since current release 0.2.0 (in progress), ErlBus was improved substantially. The current PubSub implementation was taken from the original, remarkable, and proven Phoenix PubSub Layer, but re-written in Erlang.

You may be wondering ¿why not to include Phoenix as dependency and call it from Erlang?. Well, there are some thoughts about it:

As we explained before, ErlBus is the Erlang clone of Phoenix PubSub, so the architecture and design are exactly the same.

Due to Phoenix PubSub architecture, ErlBus scales out pretty well, not only globally (in cluster) but also locally. When we start an ErlBus instance, it starts N number of shards, and this value is set in the pool_size config parameter (by default pool_size = 1). In order to have a better idea of this, we should run ErlBus.

Now we should have ebus (or ErlBus) running into an Erlang console. So now within the console let’s run the observer:

And, you should see a process tree like this: 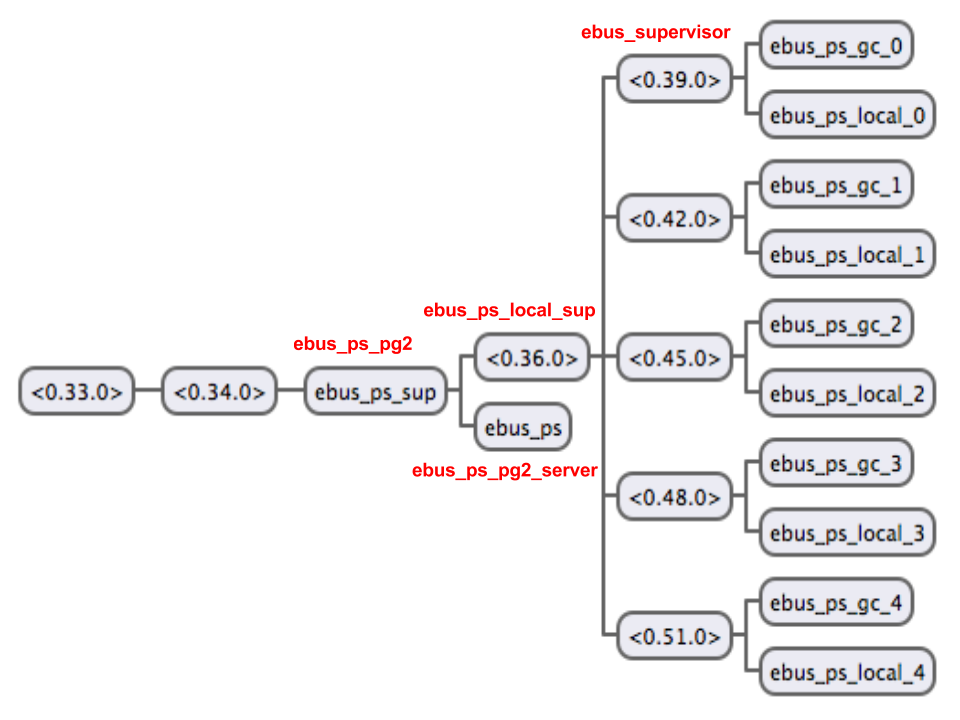 Next step may be setup an Erlang Cluster using Distributed Erlang, and then we start ebus on each one, a PG2 group is created and each local ebus_ps_pg2_server is joined in order to received all broadcasted messages and then forward them locally. This is a pretty nice and highly scalable architecture.

Within the Erlang shell:

Then what we need to do is put these Erlang nodes in cluster, so from any of them send a ping to the other:

Repeat the same thing above in node2.

Once you have handlers subscribed to the same channel in both nodes, publish some messages from any node:

And in the other node you will see those messages have arrived too:

Let’s check subscribers, so from any Erlang console:

To learn more about it you can go HERE.

So far, so good! Let’s continue!

The great thing here is that you don’t need something special to implement a point-to-point behavior. It is as simple as this:

ErlBus is a simple and usable library that make thousands times easier to build: soft-real-time and highly scalable messaging-based applications.

It was implemented taken as base a remarkable and proven framework like Phoenix Framework.

Next step is create a coarse-grained interface on top of ErlBus, like WebSockets, using Cowboy. So may be something similar to Phoenix Channels, isn’t?. See WEST.